One Little Secret is a murder mystery thriller novel of suspense and reminiscent of the popular Peyton Place series from way back when. Susan decides to invite her new neighbors to join her and her husband, Nadal for a short summer getaway in the Hamptons. Susan is hopeful that she and Nadal will become closer friends with the two couples joining them at the beach house. Unfortunately, Susan’s balloon will land pretty quickly when one of the women in the group is found murdered.

Once I began reading One Little Secret, I just kept right on turning the pages! I found the characters quite convincing, from the tenacious female detective, Gabby, to the volatile and violent wife-abuser, Louis. Bravo! Cate Holahan absolutely hits-the-mark with her well-defined characters. 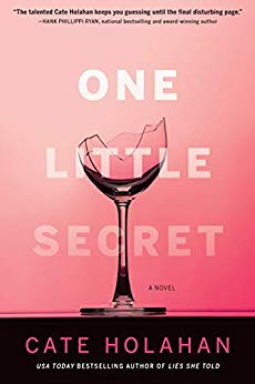 One Little Secret deals with some serious and socially relevant issues. Holahan tackles the subject of how couples deal with salary inequity, such as which spouse makes more money than the other. The plot also delves into serious matters such as a young female rape victim, a physically abused wife, and murder.

I found both the rape and the spousal abuse issues to be believable and deftly handled by the author. Rape and spousal abuse are touchy subjects and are thankfully and finally finding their way to the forefront of our society. Some may think that there is a stereotype for people who become victims of rape and/or spousal abuse. While that may be true in some cases, I don’t subscribe completely to that line of thought. It is my belief that anyone can become a victim of rape or spousal abuse. And no one on the outside can really know why something happens the way it does. There are so many relevant factors that I won’t go into here. The fact is, that anyone can be a victim of crime. And anyone can find themselves in a bad situation without an easy solution for all involved. One Little Secret does a fine job of illustrating such situations.

Get the Kindle Version of One Little Secret:

Get the Audible audio version of One Little Secret: