Psychological Thriller Novel - Once A Liar

Psychological Thriller Novel Once A Liar is an unputdownable atypical sociopathic thriller masterpiece. Ever wonder about sociopath versus psychopath? A.F. Brady clears it up. Brady skillfully illustrates the difference between sociopathy and psychopathy with expertly developed characters that bring these very real mental disorders to life with frightening authenticity.

Once a Liar is the story of Peter Caine. Peter never knew his biological father and his drug-addicted mother gave him to her brother and his wife. Peter recalls how he was ignored by his uncle, aunt and their children. The family lived an uneventful boring life. While his uncle was unambitious, Peter was self-motivated and determined to live a life in which he would be wealthy, respected, and above all else, unforgettable.

When Peter left home he fabricated a much more favorable and interesting past for himself. He  believed the interesting past he created would be difficult for anyone to question or disprove.  Keeping in mind his goals, Peter achieved impressive grades and graduated first in his class from Columbia Law. He became a top criminal attorney and became a partner with a prestigious law firm. He even married his partner’s daughter, Juliette. Peter and Juliette had one child, a son, Jamie. 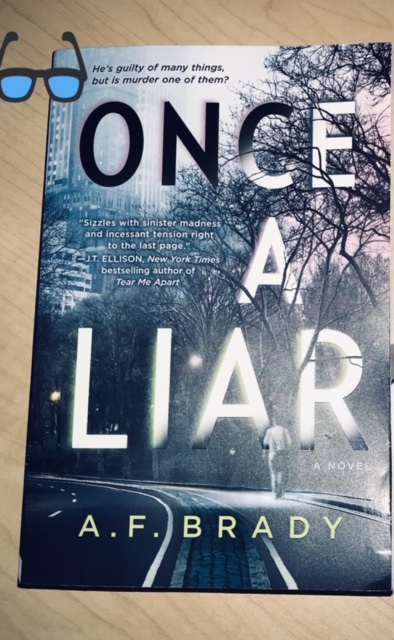 Peter Caine took no issue with winning case after case resulting in the guilty going free. It quickly becomes clear that he displays obvious symptoms of sociopathy. Peter possesses superficial charm, he has a grandiose sense of self, and he’s a pathological liar who displays a lack of remorse, shame, and guilt. His shallow emotions and his incapacity for love is disturbing. But when Peter becomes the prime suspect in the brutal murder of a former lover, Charlotte, he finds himself in a place he never expected to be—in a race to prove he’s not a killer.

Once A Liar is a story in which some of the main characters are easy to dislike. And most readers will find the behavior of Peter, and some of the other major characters, disquieting to say the least. Even so, I found myself unable to keep from turning the pages faster and faster! This thriller novel storyline is intense and more than enough to keep the reader engaged.

Fraught with tension, this expertly written psychological thriller is an irresistible and exciting rollercoaster ride through “Sociopathy Park!” I found myself dreading we might also be in for a sinister psychopathic trip as well.  If you have ever wondered about, or have forgotten, the difference between sociopathy and psychopathy—read Once A Liar!