Housewife Chronicles highly addictive read! I was drawn into this gripping story right from the start. Author Jennifer Snow's in top form with this murder mystery thriller, dark comedy novel. The story revolves around a 30 something woman whose husband has left her for a younger woman. The pretty little mistress just happens to live right next door. And both women travel in the same women’s social circle.  Oh my, can’t you just imagine how that goes?

Housewife Chronicles is a delicious mix of murder-mystery, thriller and romance. And that pretty well checks off my reading preferences, The twists and turns in the plot kept me on my toes. In spite of my busy daily schedule, Housewife Chronicles was unputdownable! I finished it in record time. Great story! 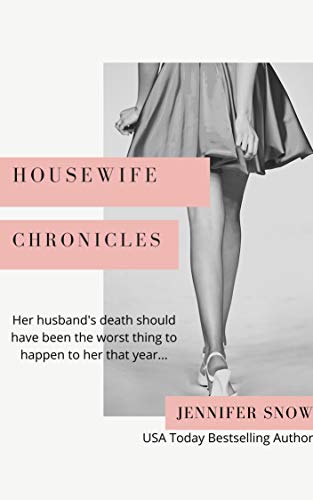 Her husband's affair coming to light two weeks before his death should have been the worst thing to happen to Beth Cartwright that year. But being a widowed, single mom in a community of upper-class housewives is proving to be far more difficult.

Housewife Chronicles is a dark comedy with a hint of mystery and a focus on unlikely female friendships.

Housewife Chronicles will be available January 2021! In the meantime, feel free to pick up some of the other wonderful books written by Jennifer Snow/J.M. Winchester. If you looking to add to your list of favorite authors, consider Jennifer Snow.

There’s a lot to say about Jennifer Snow. An internet search informs us of Jennifer’s many accomplishments.  Jennifer Snow is a bestselling author of over thirty-five romance and thriller novels. Publishing with Grand Central, Harlequin, Berkley and Thomas & Mercer, she has over ten years of experience crafting stories that connect with readers worldwide. Her books have been translated into five different languages and have been optioned for film and television. She has won the Booksellers' Best Award and has received Starred Reviews from Publishers' Weekly.