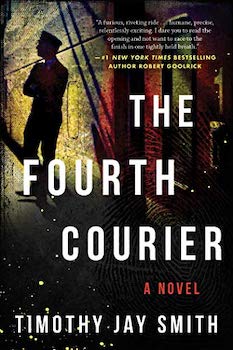 Mystery, Thriller
cold war, mystery, novel, poland, thriller, Timothy Jay Smith
I am a participant in the Amazon Services LLC Associates Program, an affiliate advertising program designed to provide a means for me to earn fees by linking to Amazon.com and affiliated sites.

The Fourth Courier is a mystery/thriller novel set at the end of the Cold War in Poland. It is the third published novel of author Timothy Jay Smith. In The Fourth Courier, a series of grisly murders in Warsaw suddenly becomes an international case when radiation is detected on the third victim’s hands, raising fears that all the victims may have smuggled nuclear material out of the defunct Soviet Union. The FBI sends Special Agent Jay Porter to assist in the investigation. He teams up with a gay CIA agent, and when they learn that a Russian physicist who designed a portable atomic bomb is missing, the race is on to find him—and the bomb—before it ends up in the wrong hands. The novel is set in 1992, just after the seismic fall of communism in Eastern Europe. Also like the his other novels, the Timothy Jay Smith uses a thriller or suspense plot to examine how events or actions related to it effect ordinary people. Jay becomes intimately involved with a Polish family, giving the reader a chance to see how people coped with their collective hangover from the communist era.

The Fourth Courier is Timothy Jay Smith’s third published novel. He is represented by Trident Media Group, a prominent literary agency in New York, and he has a two-book deal with Skyhorse Publishing, the fastest growing independent publisher in America. The Fourth Courier, released in April, continues to be favorably reviewed. It has also garnered the recognition of Bookstr as one of the five best books set in Europe to be published in 2019 (National Geographic reposted that on Facebook) and one of five books Bookstr selected to honor Stonewall’s 50th anniversary.

“What motivated me to write The Fourth Courier was a desire to portray what happened to ordinary Polish people at an exciting albeit unsettling moment in their country’s history. I hope my readers like my characters as much as I do—at least the good guys. The people are what made Poland such a great experience. The Fourth Courier is my thank-you note to them.”i

Have you read The Fourth Courier by Timothy Jay Smith? What’s your take on this book? Let’s discuss the book. Post your comments in the Reader Comments section below.