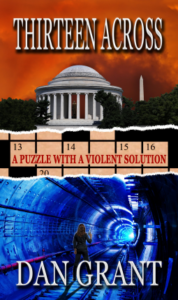 Hang on for a terroristic rollercoaster ride! Thirteen Across is an action novel, and an FBI thriller adventure, hurtling readers through Washington, D.C. FBI Special Agent Kate Morton somehow manages to survive her early morning railway commute after the commuter-packed train is bombed and derailed.

Philip Barnes, a government lab rat, is the domestic terrorist responsible for the bombing. Philip’s super power is extraordinarily high intelligence. Kate soon discovers the evil-minded Barnes is hell bent on revenge and has thrust her into a frantic race against time to solve a cryptic crossword puzzle (with a violent solution) before the stroke of midnight.

Kate is determined to thwart Philip’s plan and she is quick to accept that she cannot accomplish this goal on her own. The Thirteen Across storyline flies towards midnight at a hurried pace. The crossword puzzle, and its possible solutions, takes the characters through the nation’s capital city searching for answers, and victims, in churches, underground tunnels and more. Meanwhile, Barnes’ high-tech weaponized autonomous, driver-less vehicles travel the city undetected.

Thirteen Across reads like an action-packed spy movie. I can just picture Gal Gadot as Kate with her team of strange bedfellows (including a master crossword puzzle solver) scrambling at a frenzied pace to save lives. I found Thirteen Across to be unputdownable and an original story with  plenty of plot twists to keep it moving ever forward to its ultimate conclusion. Yet when the story ended, it left me yearning for a great action-packed sequel. And I think that is outstanding! If you like action adventure novels, I believe you will enjoy Dan Grant’s Thirteen Across.
Commissions Earned – Ads