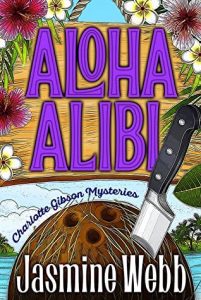 Aloha Alibi Cozy Mystery – Fun mystery read. Charlie finds a finger on her doorstep, flees Seattle and hightails it back to mom and Maui.

Aloha Alibi Cozy Mystery is book one in this entertaining contemporary fiction mystery series by author Jasmine Webb. Charlotte Gibson, “Charlie” a  young woman who moved away from her mother in Hawaii, has been enjoying a shiny new life working in a jewelry story in the thriving northwest city of Seattle.

However, soon after “Charlie” runs afoul of a local mobster, she discovers the severed finger outside the door of her Seattle apartment. Knowing she must flee, Charlie wastes no time getting out of the city. Soon after she arrives in Maui, Charlie earns her keep by taking a job at local ice cream shop.

No sooner than Charlie arrives in Maui, she learns there is quite a brouhaha going on involving local politicians, business-owners and the citizens in the area. Then a local high-profile businessman is found murdered and a cash reward is offered to whoever can solve the case.

Charlie, short on cash, wastes no time teaming up with a group of gutsy senior citizens in the area. Charlie and her cohorts soon are determined to solve the mystery of the murder and win the cash.  The lively and shrewd women are all-in on the effort to solve the murder and in sharing the reward money with Charlie.

More Books by Jasmine Webb and Others

Most people flee to Hawaii for gorgeous weather, white-sand beaches, and cocktails at sunset. Charlotte Gibson, however, is fleeing for her life after a vengeful mobster leaves a severed finger on her doorstep as a warning. Message very much received.

That’s how Charlotte—Charlie to everyone except her mom— finds herself on Maui with six dollars to her name, living with a mother who can’t stop giving her advice on how to land herself a husband. But when a businessman is murdered and his company offers a reward to whoever finds the killer, Charlie sees an opportunity: with that kind of cash, she could afford her own place and start a new life here away from the people who want her dead. After all, how hard can hunting down a murderer be?

Teaming up with a couple of old ladies with more spunk than Betty White, Charlie is sure she’s on the right track to snag the reward money. However, the infuriating-but-smoldering-hot cop trying to keep her away from his case has other ideas. Throw in a day job at an ice cream shop, corrupt local politicians, and a best friend trying to act as the voice of reason, and Charlie has her work cut out for her.

Will she be able to find the killer, or is Charlie’s time in paradise going to go straight to hell in a handbasket?

Charlie finally feels like she’s got a bit of breathing room. She’s flush with cash, she and Zoe are moving into a snazzy new apartment, and she’s riding the wave of having solved a murder a few weeks earlier. But when a local woman is murdered and her family hires Charlie to find the killer, she finds herself embroiled in yet another investigation.

However, what Charlie initially thinks might be an easy solve quickly finds her mired in Maui’s seedy underworld, with a victim who led a double life. Finding herself dealing with a suspect list longer than a CVS receipt, Charlie enlists the help of Dot and Rosie to narrow down that list and get a lead on the real killer.

But between Jake trying to keep her out of the investigation, new neighbors who make Ozzy Osbourne look normal, and an attempted robbery at her day job, Charlie quickly finds she’s got her hands full once again. And to make matters worse, as Charlie gets closer to solving the crime, she realizes the killer has another target in mind: her.

Can Charlie bring another killer to justice before she’s turned into shark bait?