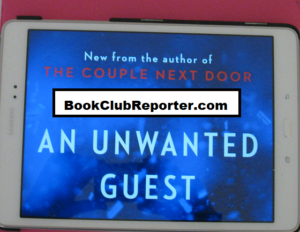 Get ready to sit by the fire wrapped in a warm blanket and be swept up into An Unwanted Guest murder mystery by Shari Lapena. The setting for this mystery novel, which is fondly reminiscent of an Agatha Christie murder mystery, is Mitchell’s Inn. The Inn is situated in a secluded wooded area of the Catskills. Surrounded by snowy mountains and fragrant native fir trees, Mitchell’s Inn feels just right for a relaxing winter getaway. Cell phone reception is non-existent in this secluded area, so guests can truly enjoy an uninterrupted weekend escape.
As late Friday afternoon turns into early evening, arriving guests are greeted by perfect snowflakes flurrying dreamily from the gray-clouded mountain sky. While the snow begins to lightly blanket the surrounding forest, innkeeper James and his son Bradley, welcome their weekend lodgers. James and Bradley are hosting a diverse group of lodgers at the inn this weekend:

After unpacking and getting settled in their charming guest rooms, the guests return downstairs. The main floor of the inn offers a traditional library with a nice selection of books, as well as comfortable seating around a cozy wood-burning fireplace. While the snowflakes continue to fall, Bradley acts as the bartender, serving up libations to his guests from the well-stocked bar. The lodgers don overcoats and winter gloves and embark on a tour of the unique “Ice Bar” located on the grounds of the inn.
[buzzsprout episode=’2375750′ player=’true’]
Surely nothing could be any better than Mitchell’s Inn for a delightful winter retreat!  However, as night falls, the beautiful snow sky has now turned sinister. The once playful snow flurries are long gone, and in their place has come a blinding snowstorm. As late evening becomes night, the lodgers head upstairs to settle into their rooms for a good night’s rest. They climb the stairs together, while expressing hope for the snowstorm to die down during the night. They anticipate all will be well in the morning. But not so fast, this a murder mystery.
The next morning, the dead body of a guest is found on the stairway. The corpse is that of the young engaged woman. Upon close inspection, her death does not appear to be an accident! To make matters worse, outside the snowstorm continues to rage. The temperature has dropped well below freezing, and the roads have become impassable due to the heavy snowfall and icy conditions. To the dismay of the lodgers the storm has managed to knock out all electricity, as well as the landline phone service. With the possibility of one of them being a murdered, the lodgers soon begin to feel trapped.
Even though some of the lodger’s cell phones are still holding a charge, without cell phone reception, no one is able to call for help. The remaining lodgers are trapped inside the inn and unable to contact the local authorities, or anyone else for that matter. Based on his legal experience, the defense attorney insists the body not be moved until the police can be contacted and arrive on the scene. As there is only one stairway leading to the rooms, the guests must now step over, and around, the dead woman’s body to get to and from their rooms.
It’s not long before another guest is found dead. Those that are still alive, try to remain calm, but as yet a third guest is apparently murdered, the remaining guests are increasingly filled with dread. They feel like sitting ducks and easy prey for the murderer. They huddle together for safety and attempt to identify the killer. Is the killer one of the them, or is there an unknown and unwanted guest at the inn? As their terror mounts they begin to suspect and accuse each other. In An Unwanted Guest murder mystery, Lapena, has constructed a solid murder mystery with enough twists and turns to keep things interesting. Grab yourself a warm blanket, cuddle up in front of the fire with a cup of hot cocoa and get started reading An Unwanted Guest murder mystery by Shari Lapena.
Commissions Earned – Ads