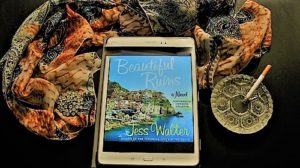 Beautiful Ruins author Jess Walter is a historical fiction writer. This engrossing story’s like an old Hollywood movie taking us to beautiful and remote locales. This is the kind of film that takes us on European destinations. Beautiful Ruins is also like a flashback into the 1960’s world of Hollywood movie stars, directors and screenwriters. This book feels like one like a big Hollywood movie as it spans the lifetimes of the characters. Beautiful Ruins, begins in the future, then takes us on a journey, strolling through the pasts, presents and futures of the main characters. As we read on, we even find ourselves in worn-torn Italy during World War II trudging along with a couple of weary American soldiers.
I truly enjoyed how Beautiful Ruins reminded me of those old beautiful, all-encompassing Hollywood films. If you were around back in the 1960’s, or have had the pleasure of catching an old movie starring Hollywood actor icons such as Marilyn Monroe, Elizabeth Taylor and Richard Burton, then this book is for you. In fact, while Liz Taylor is referred to only briefly, her irascible temperament substantially affects the lives of the main characters. Personally, this book felt a little slow in the beginning. However, I soon found myself fully invested in the futures, and pasts, of Dee Moray, Pat Bender, and Pasquale Toursi with his Hotel Adequate View. The book did end up becoming quite a page-turner for me. Ultimately, I developed such an affection for this book. I highly recommend Beautiful Ruins author Jess Walter for you and your book club readers.
Commissions Earned – Ads