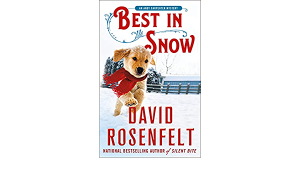 Best in Snow- Andy Carpenter Series is another great installment of this mystery series! This book in the series stands just fine on its own.

Andy Carpenter is a retired attorney who tends to get caught up in helping others who can’t afford to help themselves. Usually it is one of Andy’s cronies who manages to get Andy in the middle of an investigation.

Andy and his wife, Laurie love dogs and that is apparent throughout this book series. And the couples love of dogs, and their commitment to saving dogs, is a true-life story of the Rosenfelt’s. This time around one of Andy’s cronies, Vince ends up having to take care of Duchess a golden retriever puppy dog. Duchess is owned by the accused, Bobby, who is laid up in the hospital for a while. Vince is very upset because he has no experience with dogs. He calls Andy to tell him  does not want to be responsible for Duchess. And one of the first things Duchess does is poop on the man’s floor. Andy actually has to tell Vince he needs to walk the dog!  Poor, Duchess! You’ll just have to keep reading to see how and if Duchess survives with the dog-clueless, Vince.

Best in Snow and the Andy Carpenter series are so much fun to read. Despite his wicked wit, I really love how much Andy cares about the clients his buddies ask him to help. And while Andy is a wise-cracking smart aleck, he goes above and beyond to help his vulnerable clients. Andy always gets right-to-work on his own investigation of the crime his client has been accused.

Commission earned:
If you have read and enjoyed any of the previous books in this series, you will definitely want to read more books from the Andy Carpenter series. Like many others who have read books in this series, I have come to love how the author, David Rosenfelt can make me giggle and laugh out loud! And yet, there has been a serious crime committed…with more to come.

In this Christmas mystery, lawyer Andy Carpenter and his golden retriever, Tara, are on the beat after a body turns up in the snow and a journalist is the prime suspect.

Christmas has come early to the town of Paterson, New Jersey, in the form of a snowstorm that dumps two feet of snow on the ground. Lawyer Andy Carpenter likes snow – white Christmas and all that – but it can cause problems for the walks he takes his dogs on every day.

When Andy’s golden retriever, Tara, goes to play in the snow and instead discovers a body, Andy ends up on the phone with the local newspaper editor. The murder victim is Mayor Alex Oliva, who had an infamous relationship with the newspaper. Last year a young reporter published an expose, and Oliva had him fired for libel. Now, the young reporter – and prime suspect – is in need of a lawyer.

Andy agrees to take the case, though it’s not looking good this holiday season. The evidence is piling up faster than the snow in Best in Snow, the next Christmas mystery in the bestselling Andy Carpenter series from David Rosenfelt.