Big Lies in a Small Town 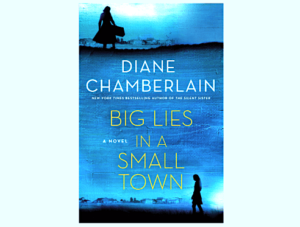 Big Lies in a Small Town

Big Lies in a Small Town by Diane Chamberlain

Big Lies in a Small Town is a captivating story of two young women from different backgrounds and time periods, bound together by one important piece of artwork.

Gifted writer, Diane Chamberlain brings us a compelling story in her latest novel, Big Lies in a Small Town. The author has expertly intertwined the characters and lives of two young women, Anna Dale and Morgan Christopher.


In 1940 Plainfield, New Jersey, we find Anna Dale, a young white woman, living in the city. Anna is a very talented artist with plenty of potential. As the winner of a recent art contest, Anna has been commissioned to create an art mural. Her mural is to be displayed at the post office in the small town of Edenton, North Carolina.

When Anna arrives in Edenton, North Carolina, she is alone, but she is excited about working on the mural. Anna is provided with an old warehouse in which to work on her mural. Anna will need a few assistants, so a few school students are chosen to help her. One of the students, is Jesse, a 17 year old black boy. Anna almost immediately recognizes that Jesse is quite a talented young artist. Jesse goes to school, but also has to be available to work on the family land. Jesse doesn’t care about school, and he cuts many of his classes. However, Jesse works hard to help Anna. But something goes very wrong and Anna and her mural are nowhere to be found.

Fast forwarding to the year 2018, we learn a young woman, Morgan Christopher, has pleaded guilty to a crime she did not commit. Currently Morgan is serving out her three-year sentence in a North Carolina prison. Before prison, Morgan was an art student, but she does not consider herself a talented artist. After about a year in prison, Morgan is offered a get-out-of-jail card. However, the offer comes with the stipulation that Morgan must restore Anna Dale’s 1940 mural.

Morgan accepts the offer, as it not only gets her out of prison, but also comes with compensation in the form of a hefty sum of money. Lisa, the person from which the offer came, is the daughter of a recently deceased artist. But the question on Morgan’s mind is, why did this artist want her to be the one to restore a mural? Lisa does not know why her father chose a convicted white woman to restore an old mural, but she is bound by her father’s will to make it happen.

Morgan is confronted by several obstacles to perform the task of restoring the decades old mural, not the least of which is, Morgan has no training or experience in restoring art murals. And Morgan is quite dismayed when she sees Anna Dale’s mural is unusually large in size. Lastly, if Morgan is informed if she does not complete the mural by the impending deadline, all bets are off, and it’s back to prison for her.

I truly enjoyed reading Big Lies in a Small Town by Diane Chamberlain. The story seemed a little bit slow in spots, however, the mystery of why Morgan was chosen to restore Anna Dale’s mural was compelling enough for me to keep right on turning those pages. And I felt like I even learned some things about art restoration processes.

The racial aspect of the story and the divisive issues related to prejudice, including prejudice against women, are handled adeptly by the author and that all works to make Big Lies in a Small Town a must-read novel. And I very much appreciate how this original storyline, presented a solid depiction of not only racial issues, but of the prejudice against women and the “Me Too” movement as well.

The author deftly weaved into this story the budding relationship between Morgan and older man. That older man, Oliver, was the art curator. He helped guide Morgan along during the restoration process on the mural. And for me, I would say that the restorative process in Big Lies in Small Town, was multifaceted, rather than just about restoring the mural.

Morgan’s growing relationship with Oliver provides Morgan with a sharp contrast of what real love looks like, as opposed to how a woman might easily settle for a man of dubious character; such as the man for whom Morgan took the blame, as his silence landed her in prison.

You may click the Amazon link provided below to pre-order Big Lies in a Small Town now, or purchase on/or after book release date: January 14, 2020:


NOTE:  Please refresh the page if you experience trouble seeing any of the Amazon links on this page.


Advance Praise of Big Lies in a Small Town:

“Chamberlain’s depictions of creative beauty and perseverance across time and in the face of inevitable obstacles will keep readers turning the pages.”―Publishers Weekly

“Chamberlain’s writing is reminiscent of a quilt made up of pieces from different people, places, and times, stitched together into a single, emotional story.”―Booklist