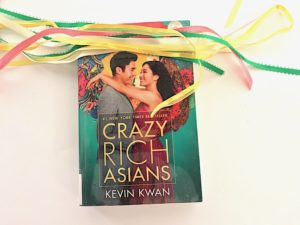 Crazy Rich Asians Book Review celebrates the book by Kevin Kwan that soared to the top of book club reading lists worldwide and Crazy Rich Asians the movie.
Crazy Rich Asians tells the story of 28-year-old Rachel Chu. Rachel is a Chinese-American economics professor at N.Y.U. She is in love with her boyfriend, Nicholas Young. And Nick is serious about Rachel too. Nick invites Rachel to accompany him on a vacation in Singapore where she will meet his family. Unfortunately, Rachel is not aware that Nick has left out a few important details about his family and himself as well. Rachel has no idea that her boyfriend is considered the most eligible bachelor in Singapore. And she has no clue whatsoever that Nick grew up in an opulent palatial home. Rachel cannot understand why Nick has never mentioned his incredible wealth.
As soon as they arrive in Singapore, it becomes apparent that Nick has not foreseen that Rachel will become an easy target. Rachel is taken off-guard as members of Nick’s family, his acquaintances and even his ex-girlfriend, take direct aim at her. To the dismay of both Nick and Rachel their summer vacation turns into a series of problems of old money, new money and meddling relatives; not to mention conniving status seekers cleverly pushing others aside on their climb to the top.
In this Crazy Rich Asians book review, I am excited to convey how very much I enjoyed the book as well as the movie. Once I picked up the book, I was loath to put it down. I found this engrossing page turner of a book to be simultaneously heartwarming and a hysterically funny depiction of its wealthy and privileged characters.
As soon as Crazy Rich Asians the movie was released in our area, my book club members and I eagerly bought our tickets for this much anticipated film. I would like to be sure to point out in this Crazy Rich Asians book review, that neither the book, nor the movie disappointed me. And all of my book club members gave both the book and the movie a big thumbs up as well.
I found the Crazy Rich Asians movie to be an enthralling and dazzling depiction of the book. While I loved the book, I did feel it was bogged down a bit by a lot of detailed descriptions of all the fabulous homes and all their rich furnishings. In this regard, the movie was more satisfying for me, as I was captivated by the outstanding set decoration and the amazing film scenery. The movie truly brought the romance of Rachel and Nicholas, as well as the stories of the supporting characters, to vivid life for me.  Crazy Rich Asians is an enjoyable romance/comedy. We feel as though Kevin Kwan has written Crazy Rich Asians for the simple purpose of inviting all of us to take an amusing, and maybe even an affectionate, look through his window into the elite Asian culture in Singapore.
Crazy Rich Asians is the first book in Kevin Kwan’s Crazy Rich Asians Trilogy. Crazy Rich Asians, China Rich Girlfriend and Rich People Problems are the three books that make up Kevin Kwan’s complete set of the Crazy Rich Asians Trilogy.
Commissions Earned – Ads