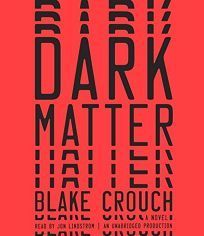 Dark Matter Science-fiction novel – Dark Matter is an intriguing high-speed trip through quantum physics, alternate lives, and one you may never forget.   Dark Matter sci-fi novel is a book I did not initially plan on reading. I had heard it was science fiction, and while I enjoy some sci-fi movies, I don’t particularly like reading science-fiction books. However, the protagonist of Dark Matter was asked a specific question, “Are you happy with your life?” So, I ask you, dear readers, can you resist asking yourself the same question? I’ve actually asked myself that question several times in my lifetime. And so there you have it, Dark Matter had me at, “Are you happy with your life?”


How did a non-science fiction fan end up reading Dark Matter in the first place? Okay, once upon a time, I was scrolling through some audiobooks, looking for something to spark my interest. And then it happened, I came across Dark Matter. I scanned quickly through the book description and deduced Dark Matter is a story which seems to have something to do with Quantum physics. Hmm.   Now I can quite honestly say that I have no expert knowledge of how quantum physics theories work. However, I can say I have enjoyed watching some quantum physics documentaries on public television. I was surprised to learn about string theory, membrane theory, and the like. I certainly cannot say I understand how the theories work, or if any of the theories are sound. But, I can say that some parts of the theories do tie in with things I have wondered about over the years.

I decided to take a little quantum leap of my own when I downloaded and listened to the Dark Matter audiobook. Thus, I began my trip through the story of Jason Dessen’s quantum journey where he is nagged by the question that precipitated his strange quantum sojourn, “Are you happy with your life?”   As the story begins, Jason is kidnapped at gun point and drugged. And the next thing Jason knows, he is on a quantum leap through his life and various versions thereof.  So, if you are super knowledgeable in the area of quantum physics, I suppose you may not particularly enjoy this book. But for those of you like me, who have minimal knowledge in that area, but enjoy the idea of quantum leaps and what that might entail, Dark Matters might be just the ticket to a quantum journey through various versions of your life…and what might have been.

I honestly loved Dark Matter. I was totally engrossed in Jason’s story. The audiobook was narrated by Jon Lindstrom, who I understand is an actor who has enjoyed quite a successful career in daytime television. Mr. Lindstrom has a smooth and pleasing voice with which he expertly portrays Jason Dessen and the other characters as well.   I found Lindstrom’s narration of Dark Matter to be nothing less than superb.
Through the voice of the narrator, we find ourselves right there, every moment, with Jason. We hear, see, and feel every experience with Jason. The reader/listener can literally feel all the emotional highs and lows that go along with Jason’s journey. We feel his fear, yet we also share his determination and his strength. So I say to Jon Lindstrom, “Bravo!”
I do love thriller novels and I think Dark Matter is mostly a sci-fi thriller. All in all, I found Blake Crouch’s Dark Matter to be a fun, fast, and furious adventure through quantum physics. If you decide to read Dark Matter, and if you would enjoy the feeling of being completely immersed in the story, I highly recommend listening to the audio book.
Fiction, Science-Fiction, Thriller
Laura Jay
0Comments