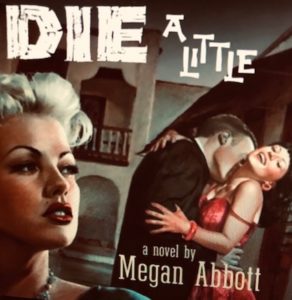 Die a Little by Megan Abbott

Die a Little by Megan Abbott is a classic noir crime story of suspense set in the 1950’s. Lora King is a school teacher. Bill is a junior L.A. investigator. He’s the with district attorney’s office, and he is also Lora’s brother. Lora and Bill have a close relationship as they are the only family they have.  And as Bill has a considerably dangerous job, Lora has become quite protective of him.
In what is a bit of a whirlwind romance Bill falls for Alice Steele and marries her. This development proves upsetting for Lora as she doesn’t trust her new sister-in-law one bit. Alice works as a wardrobe assistant in the glamorous world of Hollywood. Lora feels uneasily sure there is much more to Alice than what Bill is willing to see. Stepping right into the clutches of certain danger, Lora decides to take matters into her own hands as she secretly sets out to investigate Alice without Bill’s knowledge.
Lora’s investigative research takes her down dark alleys and into the seedy bars and the mean-streets of the L.A. underworld. She meets and jumps into a relationship with a press agent, Mike Standish. Mike is anything but a straight arrow, and he provides Lora with disturbing bits of information about Alice. Now Lora is even more determined as she moves dangerously in and out of the shadows. She moves ever forward delving precariously deeper into the sinister and murderous realm of drugs and prostitution.
In Die a Little, Megan Abbot deftly immerses the reader into a suspenseful tale of danger, crime and murder. You will find yourself frightened for Lora’s safety. You’ll feel overcome with dread and compelled to pull her back from the brink of sure death. But you will also be cheering Lora on in her quest to snatch her brother right out of the clutches of the treacherous world around him, including Alice Steele.
Commission Earned – Ads