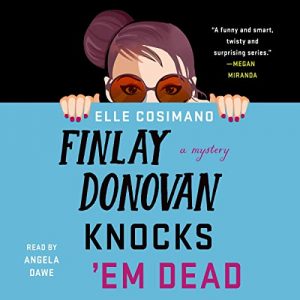 This fast moving mystery story is bursting with dark-web intrigue as Finlay and Vero band together to save the life of Finlay’s ex-husband, Steven. While Finlay has no longer loves  Steven, he is the father of their two children.

Finlay Knocks Em Dead is book two in a series. I have not read book one, but I had no problem picking up on book two right from the beginning. The main characters, Findlay and Vero are best friends who would do anything for each other. There is no doubt, these two women have each other’s back no matter how dangerous the situation may be.

Finlay Donovan Knocks’Em Dead Mystery is a fast read. I felt like I was on a rousing roller coaster ride careening over dangerous tracks with harrowing  twists and turns. Vero driving an Aston-Martin like race car driver adds another element of danger to the story, and lots of excitement for readers. Keeping up with Findlay and Vero is a energizing delight! Fasten your seat belts readers, Finlay Knocks’Em Dead is going to be a bumpy ride!  and what fun!

Finlay Knocks’Em Dead would be a great women’s book club selection as there is so much to talk about regarding the unfailing friendship of the two main characters, Finlay and Vero, in this exciting women’s contemporary fiction, mystery story.

About the Author: Elle Cosimano:

Elle Cosimano is the Edgar-nominated and award-winning author of the acclaimed young adult novels Nearly Gone, Holding Smoke, The Suffering Tree, and Seasons of the Storm. Her debut novel for adults, Finlay Donovan Is Killing It, kicked off a witty, fast-paced contemporary mystery series, which was featured as a People Magazine Pick and one of New York Public Library’s Best Books of 2021. In addition to writing novels for teens and adults, her essays have appeared in The Huffington Post and Time. Cosimano lives with her husband and two sons in Virginia.

“A funny and smart, twisty and surprising series.”―Megan Miranda

Finlay Donovan is―once again―struggling to finish her next novel and keep her head above water as a single mother of two. On the bright side, she has her live-in nanny and confidant Vero to rely on, and the only dead body she’s dealt with lately is that of her daughter’s pet goldfish.

On the not-so-bright side, someone out there wants her ex-husband, Steven, out of the picture. Permanently. Whatever else Steven may be, he’s a good father, but saving him will send her down a rabbit hole of hit-women disguised as soccer moms, and a little bit more involvement with the Russian mob than she’d like.

Meanwhile, Vero’s keeping secrets, and Detective Nick Anthony seems determined to get back into her life. He may be a hot cop, but Finlay’s first priority is preventing her family from sleeping with the fishes… and if that means bending a few laws then so be it.

With her next book’s deadline looming and an ex-husband to keep alive, Finlay is quickly coming to the end of her rope. She can only hope there isn’t a noose at the end of it…