Lying Next to Me Book Review-Suspense Mystery

Home
Crime
Lying Next to Me Book Review-Suspense Mystery 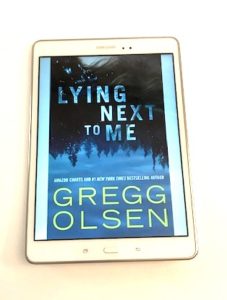 Lying Next to Me Book Review-Suspense Mystery

Lying Next to Me Book Review – Suspense Mystery Thriller

Lying Next to Me book review – suspense mystery thriller: Gregg Olsen’s novel, Lying Next to Me, is a page turner right from the start! Anxious to figure out what happened to Sophie, a woman with a husband and a three-year old daughter, I rock ‘n rolled right through this book.
Author Gregg Olsen opens his novel, Lying Next to Me, with a short, but interesting and foreboding, tale (prologue) of the female giant Pacific octopus. I actually read the octopus tale twice to try to figure out why I needed to know about this octopus.
Adam and his wife, Sophie, were spending Memorial Day weekend in a cabin by the beach. Sophie was relaxing alone on the beach while Adam and their little girl, Aubrey, were out on the water crabbing from a row boat. All was tranquil and calm until Adam heard Sophie screaming. Adam looked toward the shore to see a man dragging Sophie across the sandy beach as he and Aubrey watched helplessly from the row boat. Adam’s eyeglasses slipped from his face and were lost. With blurred vision, Adam continued rowing frantically back to shore. His desperate effort to keep his eyes on his wife and rescue her had failed.
There were other vacationers staying in the cabins, including Conner and his wife, Kristen. Kristen is a sharp attorney (who is having trouble getting pregnant) and Connor works as a headwaiter. There was also an older woman, Teresa, and her grandchildren vacationing in one of the nearby cabins. But it was only one elderly man, with failing eyesight, who had seen what happened to Adam’s wife. Sophie was kidnapped in broad daylight. She was taken right out in the open on the beach where her husband and daughter had watched helplessly from the row boat.
The local law enforcement arrived on the scene, but there wasn’t much to go on. Detective Montrose and his female partner, Lee, began working the kidnapping case. We learn that Adam and Lee had actually known each in the past. Adam had been a buddy of Lee’s older brother when they were all kids growing up in the same small town. Lee felt a strong desire to solve Sophie’s case. She was driven because of her connection to Adam, but also because, Lee, as a young girl, had been abducted and sexually abused by a strange older man. The man abused Lee and then dumped her, still tied up, in a field. The townspeople searched for Lee using a grid system. But it was Adam who happened to be the one to find Lee, and an unspoken bond was formed.
When I reached the end of Lying Next to Me, I went back and re-read the part about the giant octopus. This time, I only had to read about that scary octopus one time. Now, it all made sense.
Lying Next to Me Book Review: This is my third Gregg Olsen mystery thriller book and it did not disappoint. Lying Next to Me provided plenty of twists and turns to keep the momentum of the story moving forward at a quick pace. If you’ve read other Gregg Olsen books, you’ll love Lying Next to Me. If this is your first Gregg Olsen book, you’ll love Lying Next to Me.
Read Book Reviews for More Murder Mystery Thriller Books
Commissions Earned – Ads