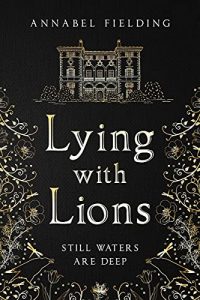 Lying With Lions Historical Fiction occurs not long before the close of the Edwardian era. Powerful matriarch, Lady Helen has ambitious plans. Lyons Historical Fiction takes place nearing the end of the Edwardian era, which was preceded by the Victorian era.  The timeframe is very important as it is also happening at the turn of a century fraught with political struggles.

Lady Helen Bryant, is the matriarch of a titled and powerful family. In shades of women’s rights, or the lack thereof, Lady Helen is faced with making a plan to hold on to power through her son.

Agnes Ashford finds herself in a rather interesting position as she works for Lady Helen, but is also in a physical relationship with her employer. Lady Helen relies on Agnes to perform the important and daunting task of cataloging the archive of the Bryant family. However, due to the nature of her work, Agnes becomes aware of  a dark secret and  must decide how she will proceed.

Lying With Lions is an engaging read on many levels, and I quite enjoyed the story. If you are looking for a book to read that covers a rarely written about time in history, Lying with Lyons might be your next read!

Edwardian England. Agnes Ashford knows that her duty is threefold: she needs to work on cataloguing the archive of the titled Bryant family, she needs to keep the wounds of her past tightly under wraps, and she needs to be quietly grateful to her employers for taking her up in her hour of need. However, a dark secret she uncovers due to her work thrusts her into the Bryants’ brilliant orbit – and into the clutch of their ambitions.

They are prepared to take the new century head-on and fight for their preeminent position and political survival tooth and nail – and not just to the first blood. With a mix of loyalty, competence, and well-judged silence Agnes rises to the position of a right-hand woman to the family matriarch – the cunning and glamorous Lady Helen. But Lady Helen’s plans to hold on to power through her son are as bold as they are cynical, and one day Agnes is going to face an impossible choice…