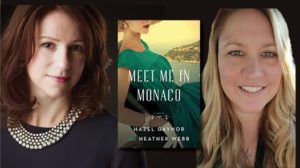 
Meet Me in Monaco is beautifully written by the writing team of bestselling author, Hazel Gaynor and historical novelist, Heather Webb. Each chapter is told from the alternating points of view of Sophie Duval and James Henderson and Angeline West’s news articles.

Meet Me in Monaco begins in May 1955. The London Herald has just printed a news article written by fashion editor, Angeline West.  “Hollywood’s brightest star,” Grace Kelly has arrived in Cannes to attend the annual Film Festival. Miss Kelly is “dressed in a demure two-piece suit…”

Financially-strapped perfumer, Sophie Duval, is also in Cannes running the Duval perfume boutique. Following the death of her father, Sophie is doing her best to carry on the family perfume business. The flowers grown on the Duval family-owned land provide the quality ingredients essential to creating Duval’s unique perfumes. With Sophie’s father gone, her alcoholic mother has been making a mess of the company finances. Sophie is grappling with the unthinkable possibility of not only losing the land, but the perfume business as well.

James Henderson, a war veteran, works as a London news photographer. James is divorced and he has suffered some genuine financial and emotional set-backs. His young daughter, Emily, lives with her mother and her step-father. James adores Emily and does his best to spend as much time with her as possible.   James doesn’t care for the kind of photos he is paid to shoot. His favorite photographic subjects are landscapes and nature. Too his chagrin, James feels like a loathsome member of the bad-mannered paparazzi when he is tasked with acting as the Herald’s photographer for Grace Kelly’s appearances in Cannes and Monaco.

While working during the Cannes Film Festival, we find James chasing Grace Kelly into Sophie Duval’s perfume boutique. However, Sophie effectively thwarts James’ attempt by hiding Grace Kelly in the boutique office. This failed attempt is bad news for James, as his job at the Herald is on the line. He desperately needs some good shots of Grace Kelly to satisfy his boss. Although James leaves the boutique with Sophie’s sweet-smelling business card, he was not able to get a photo of Grace. Miss Kelly left the boutique quite grateful to have been rescued by Sophie.

Later James has a chance encounter with Grace Kelly during a scheduled  photoshoot for photographers to take pictures of Miss Kelly’s first meeting with Prince Rainier. When Grace catches a whiff and inquires about the name of the scent, James hands her Sophie Duval’s perfume-scented business card. This moment will define the intertwined storyline of Sophie, James and Grace Kelly.

In Meet Me in Monaco, we learn that Sophie is a strong-willed woman who adamantly refuses to lose the family land and the Duval perfume business. Sophie remains strong, stays true to herself, and to her father’s memory. Sophie Duval is not a quitter. Even in the face of impending financial ruin, Sophie continues to create new high-quality and uniquely personal perfumes. Sophie is the epitome of a quote by Grace Kelly, “I think that women can do anything they decide to do.”


Now it’s 1956 and the news is simply divine! Grace Kelly and Prince Rainier of Monaco are getting married! Will Sophie garner an invitation? But more importantly, will Grace Kelly be wearing one of Sophie’s wonderful fragrance creations?

I thoroughly enjoyed reading Meet Me in Monaco. I was entirely invested in the story! I honestly could not turn the pages fast enough. I found myself searching the internet for information about Grace Kelly. I was amazed how little I knew about her. The information I found painted an amazing portrait of a lovely woman with a beautiful soul.

“I avoid looking back. I prefer good memories to regrets.””—Princess Grace of Monaco