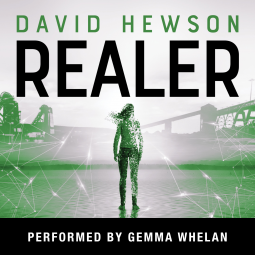 Murder mystery thriller novel – Realer is set in a post-pandemic world. Published during the current deadly Covid-19 pandemic, Realer may seem all too real. The title is unsettling as it was published during the Covid-19 pandemic which really has resulted in millions of world-wide deaths.
Not to take away from the opinions of other fine book reviewers, I did not find Realer to be an “escape” from our current world. We are all still in the throes of a major pandemic, with death knocking on our doors. Rather, I view author David Hewson’s Realer story to be a somber reminder of what has tragically become our every day world. However, I will say there is an admirable spirit of courage running through the story.
Aside from my personal feelings and fears during our current pandemic world, I found Realer to a well-written mystery-thriller novel.


Award-winning author, David Hewson has penned an engrossing story of Charlie, a teenager. Charlie’s beloved father recently gifted her with Realer (a popular device, much like the modern day virtual reality headset).
Charlie could not have foreseen she would witness her father’s murder through the
Realer device. After the shocking and sudden loss of her father, Charlie begins her dangerous quest to uncover the killers in a frightening post-pandemic world. Charlie rises to the challenges she must face in her quest to uncover the circumstances of her father’s murder.
We soon see Charlie is a determined young woman with a courageous spirit. And while we cheer her on, we can’t help but fear for Charlie’s life. Will Charlie join her father in death? Or, will her indomitable spirit persevere? It is that uncertainty, coupled with hope for the future, that drives readers forward.
Get the Audiobook – Ad Commissions Earned


About the Author – David Hewson
David Hewson is the author more more than 20 novels that have been translated into a wide range of languages, from Italian to Japanese, and range from the Copenhagen of Sara Lund in The Killing to Amsterdam with the Pieter Vos mysteries and the Italy of Nic Costa. He is also the author of an audio adaptations of Romeo and Juliet, narrated by Richard Armitage, and, with A.J. Hartley, audio adaptations of Macbeth and Hamlet.

David has featured regularly on the speaker lists of leading international book events, including the Melbourne and Ottawa writers’ festivals, the Harrogate Crime Festival, Thrillerfest, Bouchercon and Left Coast Crime. He has taught at writing schools around the world and is a regular faculty member for the Book Passage Mystery Writers Conference in Corte Madera, California, where he has worked alongside writers such as Martin Cruz Smith and Michael Connelly.