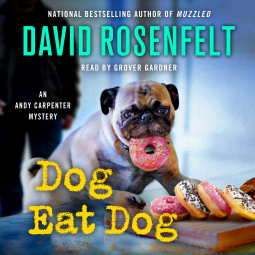 Author, David Rosenfelt, brings readers another book in the Andy Carpenter Mystery Series. And don’t worry if you haven’t read the other books in the series yet. Dog Eat Dog stands just fine on its own. And I can say this with certainty because this is the first book I have read in this series. If you enjoy Dog Eat Dog as much as I did, you will definitely want to read more books from this series.

While the story begins in New York City, it quickly moves on to the state of Maine, where a cold-case murder is reopened. What does this have to do with the man beating a dog issue? Read the book o find out!

I actually listened to the audiobook version of this mystery thriller novel. The narration provided by Grover Gardner was spot on. I feel qualified to say that since I spent the first twenty-five years of my life in New York City. Actually, Gardner did an expert job on both the New York and Maine accents.

I listened to the audiobook in bed and my husband kept asking, What are you giggling about?” My answer? “This book, the lawyer character is just so wicked funny with the wisecracks.”

Here are some awesome reasons I really loved this mystery thriller:

• Light, but engrossing mystery plot
• Sharp-witted and expertly written
• The inclusion of dog loving characters
• The mention of the real life Tara foundation set up by the author and his wife


For your convenience, I have included the publisher’s description and an excerpt from this book below:

Lawyer Andy Carpenter and his golden retriever, Tara, work to free a man who risked it all to help a dog in need

Lawyer Andy Carpenter and his wife, Laurie, enjoy walking their dogs, Tara and Sebastian. By this point in their marriage, it’s routine. When out for one of their strolls, their simple ritual isn’t so simple anymore. Across the street, a man is mistreating his dog. Three things happen at once: Andy yells, Laurie runs to stop the abuse, and so does a closer passerby, who so thoroughly beats the owner that both are arrested when the cops arrive.

Andy scoops up the dog and takes him to the Tara Foundation, the dog rescue organization that’s always been his true passion. Meanwhile, at the police station, the passerby is identified as Matthew Jantzen, and he’s wanted for murder. Andy and Laurie are struck by the fact that Jantzen, a man on the run, would nevertheless intervene to help a dog, and decide to find out more.

Dog Eat Dog, the twenty-second installment in the Andy Carpenter series, features the charming cast of characters – old and new – that David Rosenfelt is known for and the dogs that accompany them.

The guy looked at her, didn’t say anything, and did something that made Charkin think that maybe this wasn’t going to end well. The guy punched him in the mouth. Not that hard; the guy could have crushed his face if he wanted to.

Charkin’s head went back in the chair. He was stunned by the punch, and by the taste of blood in his mouth. “What did you do that for?” he managed. “We’re cooperating.”

The assailant didn’t answer; instead he quickly took the gun back out of his pocket, put it to Charkin’s head, and pulled the trigger. It happened so fast that Charkin did not realize it was coming.

I am a novelist with 27 dogs. I have gotten to this dubious position with absolutely no planning, and at no stage in my life could I have predicted it. But here I am.

My childhood was relentlessly normal. The middle of three brothers, loving parents, a middle-class home in Paterson, New Jersey. We played sports, studied sporadically. laughed around the dinner table, and generally had a good time. By comparison, “Ozzie and Harriet’s” clan seemed bizarre.

I graduated NYU, then decided to go into the movie business. I was stunningly brilliant at a job interview with my uncle, who was President of United Artists, and was immediately hired. It set me off on a climb up the executive ladder, culminating in my becoming President of Marketing for Tri-Star Pictures. The movie landscape is filled with the movies I buried; for every “Rambo”, “The Natural” and “Rocky”, there are countless disasters.

I did manage to find the time to marry and have two children, both of whom are doing very well, and fortunately neither have inherited my eccentricities.

A number of years ago, I left the movie marketing business, to the sustained applause of hundreds of disgruntled producers and directors. I decided to try my hand at writing. I wrote and sold a bunch of feature films, none of which ever came close to being actually filmed, and then a bunch of TV movies, some of which actually made it to the small screen. It’s safe to say that their impact on the American cultural scene has been minimal.

About fourteen years ago, my wife and I started the Tara Foundation, named in honor of the greatest Golden Retriever the world has ever known. We rescued almost 4,000 dogs, many of them Goldens, and found them loving homes. Our own home quickly became a sanctuary for those dogs that we rescued that were too old or sickly to be wanted by others. They surround me as I write this. It’s total lunacy, but it works, and they are a happy, safe group.