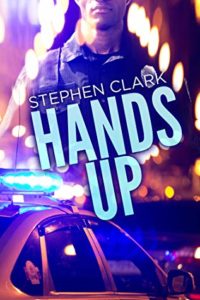 Police Procedural Brutality Racism – Hands Up is the disturbing story of  Tyrell, a young black male, who was shot and killed by Ryan, a white rookie police officer. This premise alone is enough to invoke feelings of anger, sorrow and  guilt.

The author Stephen Clark does a fine job bringing the reader an engrossing and  gripping urban fiction story of racism and injustice. The reader is almost immediately faced with the fact that Tyrell was unarmed, at the time he came into contact with the police officer, Ryan, and his older/senior partner, Greg.

The murder of Tyrell occurs in an indigent urban part of the city. Hands Up brings to the reader an all too realistic story of one more young black male’s shocking and unjustified death in the hood. Hands Up reinforces the shock and grief felt by citizens of a country that was formed on the basis of freedom and equality. And the people of this country are constantly confronted, and literally bombarded, with similarly tragic, and completely avoidable deaths of black men.

It doesn’t take a rocket scientist to see that racism is somehow, yet inexplicably to me, still alive. I am writing this book review within just a couple of weeks of Martin Luther King Day. I feel in my heart that this country is sorely in need of another man such as the great Dr. King.  Martin was the man with a dream shared by black citizens of this country. And that same dream, I am sure is, shared by disenfranchised people everywhere.

In my lifetime, I have witnessed great positive changes in this country. I feel proud to be employed in a workplace that sets a good example of how a company, free of discrimination, empowers an integrated workforce. We have been provided with diversity training. And each year, we take part in an annual “celebrate diversity” event. I also have lived long enough to see great strides in providing improved education and better job opportunities. Even so, as a country, we still have much work to do towards attaining true equality.

Hands Up is a compelling story. The characters are credible and ring true. And while the murder of Tyrell is tragic, the reader is confronted with not just tragedy, but with anger, distrust, hate, and racism. Hands Up serves up a compelling story that makes us think.  And hopefully, it will also make us act.

As an adoptive (and Caucasian) parent of three children of a different race, it is my hope that we not only share the same dream as Martin Luther King, but that we “make it so.” It is my dream that we cease to accept the status quo. We the people are afforded the right to make decisions and choices. Let us go forward in making the right ones, the choices that will ensure freedom and justice for us all.

And while I may have sermonized a bit in this book review, Hands Up does not. I highly recommend Hands Up. It’s a great read with a gripping and authentic story.
Crime, Fiction, Police Procedural
Laura Jay
0Comments