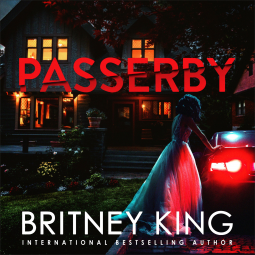 This dark psychological thriller Passerby by Britney King is full of suspense and foreboding.

Psychological thriller Passerby is a mesmerizing story written by author Britney King. This dark psychological thriller Passerby is full of suspense and of foreboding of what would come next. Ruth runs the family’s Magnolia House Bed & Breakfast pretty much on her own. She shoulders most of the physical work and everything else that goes along with running such a business.

There are enough dubious characters in this story to keep the reader guessing. Do any of the murders have to do with Ashley, the girlfriend of Ruth’s brother, Davis? And I’m not sure we can actually call Ashley, Davis’ girlfriend as she is just a woman he picked up on the side of the road. It becomes apparent pretty quickly that Davis is a hot mess. And, if there is one thing for sure, it is that the woman Davis brought into his sister’s life seems to derive a strange pleasure out of chiding Ruth in the midst of all the unfortunate events with which Ruth must deal.

I was totally gripped by this story of the mysterious Ashley and the vanishing and/or dead guests. How long can Ruth keep shouldering all the responsibility? How much can one little bed and breakfast sustain before the business fails due to multiple murders?

Britney King lives in Austin, Texas with her husband, children, two dogs, one ridiculous cat, and a partridge in a pear tree. When she’s not wrangling the things mentioned above, she writes psychological, domestic and romantic thrillers set in suburbia. Britney has three series and several standalone novels.

Britney King lives in Austin, Texas with her husband, children, two dogs, one ridiculous cat, and a partridge in a pear tree. When she’s not wrangling the things mentioned above, she writes psychological, domestic and romantic thrillers set in suburbia. Britney has three series and several standalone novels.

The Bedrock Series features an unlikely heroine who should have known better. Turns out, she didn’t. Thus she finds herself tangled in a messy, dangerous, forbidden love story and face-to-face with a madman hell-bent on revenge. The series has been compared to Fatal Attraction, Single White Female, and Basic Instinct.

The Water Series follows the shady love story of an unconventional married couple—he’s an assassin—she kills for fun. It has been compared to a crazier book version of Mr. and Mrs. Smith. Also, Dexter.

Around The Bend is a heart-pounding standalone, which traces the journey of a well-to-do suburban housewife, and her life as it unravels, thanks to the secrets she keeps. If she were the only one with things she wanted to keep hidden, then maybe it wouldn’t have turned out so bad. But she wasn’t.

The With You Series at its core is a deep love story about unlikely friends who travel the world; trying to find themselves, together and apart. Packed with drama and adventure along with a heavy dose of suspense, it has been compared to The Secret Life of Walter Mitty and Love, Rosie.

The Social Affair is an intense standalone about a timeless couple who find themselves with a secret admirer they hadn’t bargained for. For fans of the anti-heroine and stories told in unorthodox ways, the novel explores what can happen when privacy is traded for convenience. It is reminiscent of films such as One Hour Photo and Play Misty For Me.