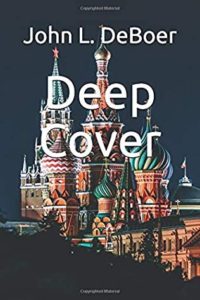 Spy thriller novel Deep Cover scares the hell out of me! John L. DeBoer’s astute espionage novel has my political fears on high alert.
Would a spy thriller like Deep Cover alarmed me twenty years ago? I don’t think so. However, I’m reading Deep Cover during present time. This exciting spy thriller has come at a time when the political state of the U.S.A. seems like it’s in a manic state. Albeit, that is just my personal take on it.


Deep Cover has come during a phase in which the population is not just on two different political sides, but on many different sides. And that doesn’t necessarily need to be a bad thing…as long we express ourselves through high intellect and integrity rather than by acting out with violent rage. And, yes, there is a limit to what a population can endure. For instance, my greatest fear is that we may forget the old adage: “united we stand, divided we fall.”
My take on Deep Cover could be completely off base. Be that as it may, John L. DeBoer has expertly written a fast paced thriller novel. Deep Cover will get you where you live. The story revolves around spies meddling in the politics of other countries. And also paints what is probably a very accurate portrait of Russian spies who were placed in the U.S.A. and have been here for fifteen years.
Deep Cover mentions a John Wayne movie. My family has been on a John Wayne movie kick here lately. I am familiar with the John Wayne movie, The Searchers. Deep Cover contains a reference to the movie likening the part of a young girl, played by Natalie Wood, to the lives of the Russian spies living in America. The girl had been captured by the Indians and she lived with the Indians, as an Indian for many years. She was an Indian.
I am an Amazon affiliate and earn fees through the Amazon links on this site. If you would like to purchase a copy of Deep Cover just click the Amazon link on this page.

The similarity to how Natalie Wood’s character became assimilated into the Native American culture, and came to identify with the Indian way of life, reflects the situation in the lives and feelings of many of the foreign spies who have lived in America for so long. I could see how that fact alone could serve to create a culture of self-sabotage by the spies who have been living comfortably for years.
John DeBoer has written an intelligent and compelling spy thriller. Deep Cover is an absorbing and action-packed story. DeBoer makes the reader think. Deep Cover is an exceptional and thought-provoking read.

Note to my readers: You can also access and listen to my book review episodes in my Book Club Reporter book review podcast: https://bookclubreporter.buzzsprout.com