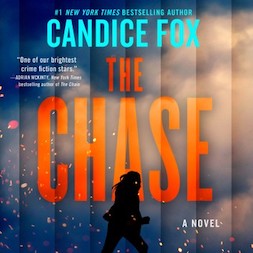 The Chase-Action Thriller – Candice Fox novel opens with a bang! Prison staff families with children are headed to a remote desert prison.

The families are riding in a bus and approaching their destination, the isolated prison. The families, consisting of spouses and children, make this same trip every year for the annual, prison staff versus prisoners, softball game.

I was gripped right from the beginning of The Chase. The action in this crime-thriller story erupts and bursts forth right from the start. As the bus, full of precious passengers, lumbers towards the prison, a sniper fires his weapon blowing out a tire. As the bus lurches sideways, it is clear the bus-driver has been mortally wounded. Not understanding what is happening, the frightened adults and children on the bus begin to panic.

Inside the penitentiary,  the staff and prison guards appear to be distressingly unprepared, as an unknown caller orders the prison staff to open the gates and release every single prisoner. And to ensure the caller’s instructions are followed, the lives of the families on the bus are threatened.

The imminent and astounding result is all the of prisoners are released. It is mind-boggling to envision over six-hundred dangerous criminals, fleeing the prison walls. Prisoners no more, they move in droves across the desert land.

In addition to the story of John Kradle and his claim that he was falsely accused and innocent of the charges of which he was convicted, there are several other backstories with this novel. So as I imagine the scene of the criminals fleeing the prison walls, I recall the old 1960’s television series, The Naked City, in which the narrator said: “There are eight million stories in the naked city, this is one of them.” So on this day in The Chase, there are quite a few stories, John Kradle’s story is one of them.

As the main backstory of The Chase focuses heavily on John Kradle, who has continued to maintain his innocence regarding the deaths of his wife and child. Kradle is determined to use the prison break as what is most probably his one and only chance to prove his innocence and to exonerate himself.

The Chase-action thriller novel is intriguing. I enjoyed the engrossing stories in this gripping and this exciting action-thriller novel.

Note: I listened to the audiobook of The Chase – A Macmillan Audio production from Forge Books. #MacmillanAudio #ForgeBooks #NetGalley

The Chase is a modern The Fugitive with characters only #1 New York Times and Globe and Mail bestselling author Candice Fox can write.

“Are you listening, Warden?”
“What do you want?”
“I want you to let them out.”
“Which inmates are we talking about?”
“All of them.”

When 650 of the world’s most violent human beings pour out of the Pronghorn Correctional Facility into the Nevada Desert, the biggest manhunt in US history begins.

For John Kradle, this is his chance to prove his innocence, twenty-six years after the murder of his wife and child. He just needs to stay one step ahead of the law enforcement officers he knows will be chasing down the escapees.

Death Row Supervisor turned fugitive-hunter Celine Osbourne is single-minded in her mission to catch Kradle. She has very personal reasons for hating him – and she knows exactly where he’s heading…

About the Author – Candice Fox