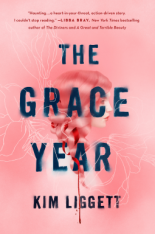 The Grace Year – YA Fiction Novel

The Grace Year – YA Fiction Novel. Kim Liggett has written a completely absorbing YA fiction novel with an amazing feminist story! I was completely absorbed by The Grace Year, which is a film project in the works.
I raced through the audio book version! The audio narration was great, by the way! The novel, The Grace Year has garnered such attention that Kim Liggett’s novel is now a film project to be directed by Elizabeth Banks.
The Grace Year YA fiction story caused me to recollect my junior high school days, when a group of girls formed what they referred to as a sorority. In reality, it was not a sorority at all. It was a just a band of violent female bullies. And it seemed their ire could be raised by any school girl who might catch the eye of a school boy, whether intentional or not.


In this YA dystopian fiction story,  The Grace Year provides us with the possibilities of how young women may comport themselves when they are expelled from the community, and cast into the unknown for a year with no escape. What happens when you exile a bunch of female teens for the Grace Year? Quite a lot actually.
The instructions provided to the girls were few. But it was made clear that each girl would need to identify their “magic” and then get rid of it. The magic is something they were taught to believe was a power they possessed as women. They are led to believe this magical power could be used against men. Therefore, during the Grace Year, each girl must determine her own magic. Then she must find a way to rid herself of it before returning to the community.
Before the girls leave for their Grace Year, they have to line up before the community. Then the men will choose a wife from among the group of girls. Girls who are not chosen to be a wife, still need to participate in the Grace Year expulsion. However, when the unchosen returned to the community after the Grace Year, they would be subject to serve the community according to whatever low level occupations were chosen for them by the men.
I found the Grace Year to be interesting on several levels. Firstly, The Grace Year deals with feminist issues for sure. And the next important issue has to be, what happens in a society where the men are “died in the wool” misogynists Therefore, the next issue to be faced is misogyny? As most women are aware, a misogynist is a person who dislikes, despises, or is strongly prejudiced against women.


As it turns out, it’s not easy finding your magic, only to be forced to let it go. And if you let it go, does that mean you will never be able to use your “feminine wiles” against the poor unsuspecting men? Over the ages, have men really been concerned about these things? Just think of what you hear or read about every day. Women and girls being molested, raped and killed. And we do know that not only women are attacked in such ways. And I am sure there is relevant research with which one might be able to ferret out the reasons these crimes are so rampant in our society.

The Grace Year challenges women to recognize feminine issues. Women should stand together and not let anyone push them into a group where they end up as enemies against their own kind. Kind of like that junior high school gang of girls, who tried to beat up any girl outside their group who might gain the attention of the school boys.
So, I think that brings me full circle. The Grace year is a story with value for teens and women of all ages. Kim Liggett has written a story of great value to our society. The Grace year is full of timely, relevant information and important messages for women. The Grace Year is a perfect choice for a YA book club and/or women’s book club.
Book Clubs, Fiction, Women's Fiction, Young Adult YA Fiction
Laura Jay
0Comments