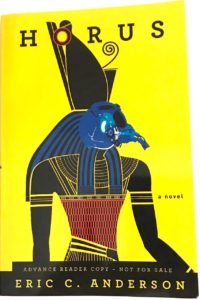 From the Publisher – The New Caliphate Trilogy Horus Book Three

RECOVERING FROM THE LAST ROUND OF TERROR – AN EXHAUSTED U. S. PRESIDENT DEALS WITH THE SPECTER OF NUCLEAR HORROR.

HORUS ends the thrilling New Caliphate trilogy, which began with OSIRIS and ANUBIS, where megalomaniacs battled zealots and America was caught in the crossfire.U.S. Marine Corps Master Gunnery Sergeant More and U.S. Army Special Forces Major Faheem hoped to never see one other again. But, warlords and fanatics on the march in the Middle East have no regard for others.

With ISIS on its heels and the Caliph on the run, Turkish strongman Recep Erdogan revives the Ottoman Empire. The Kurds refuse to get out of his way. Poison gas in play, the jihadi have set Europe aflame, and cyber-criminal ODIN has found his way to a keyboard. More and Faheem discover that North Korean has sold cruise missiles to terrorists. Can they stop these madmen before mushroom clouds light up the world?

Eric C. Anderson, the author of Horus (the third book in the New Caliphate Trilogy) was a former intelligence officer, and he hit the mark with this intense international military story. From Washington to the Middle East, Horus will strike fear in the hearts of anyone who reads it and wonders how long it will be until something like it happens in real life.
The subject matter in Horus is not my usual choice as far as genre and subject matter. I found myself literally frightened by the plans, schemes and happenings in this military thriller. The characters are strikingly authentic.
This story seemed only all too real and had me believing it to be terrifyingly prophetic. If you enjoy true-to-life military operations with a realistic storyline that could end up in nuclear destruction, this is your book. And if you want the entire story, be sure to read the first two books of this trilogy, Osiris and Anubis.
Commissions Earned