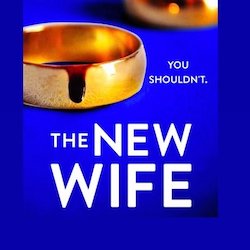 The New Wife – Mystery Thriller Novel -An engrossing, challenging murder-mystery set in a small town where nothing ever happens, until now. Georgie, and her grown-up son, Sam, live in a peaceful town where anything exciting and/or untoward almost never disturbs the peace. Georgie spends a lot of time hanging out with the parents of Lauren, the young woman who recently married Sam.

On the surface this group of friends and their children appear to have developed strong friendships over the years. Now that Sam and Lauren have married, those family friendships have naturally grown even closer. But not everything is as tranquil as it seems and that becomes very clear when the new wife is discovered dead.

Was Lauren’s death a freak accident … or  was she murdered? As far as friendships, all bets are off. Sam is a suspect of the murder of his new wife, Lauren. As Sam maintains his innocence, Georgie frantically sets out to prove her beloved son’s innocence. Georgie soon realizes those she relies on most may not be as trustworthy as she thought.

I completely relished reading The New Wife! This novel about a newly married man and his mother offers readers a thrilling murder mystery suspense story.  The well-drawn characters are expressive and fascinating. Lies among the characters abound. While their motivations are not always easy to understand, that just serves to make the mystery of Lauren’s death delightfully more difficult to solve. The dysfunctional personalities among the individuals makes for an intriguing and gripping page-turner. I am looking forward to reading more from the author, Sue Watson.

About the Author: Sue Watson

Sue Watson was a TV Producer at the BBC until she wrote her first book and was hooked.

Now a USA Today bestselling author, Sue has written eighteen novels, many have been translated into several languages. Sue is now exploring the darker side of life with her thrillers: Our Little Lies, The Woman Next Door, The Empty Nest, The Sister-In-Law, First Date and The Forever Home.

Originally from Manchester, Sue now lives with her family in Worcestershire where much of her day is spent writing – okay, procrastinating. Her hobby is eating cake, while watching diet and exercise programmes from the sofa, a skill she’s perfected after many years of practice.

You can never truly know what goes on behind closed doors…

My darling son, Sam, is marrying his childhood sweetheart and I couldn’t be prouder of the man he’s grown into. Walking out on his abusive father all those years ago was the best thing I ever did. And today he stands, tall and handsome, saying ‘I do’ to my dream daughter-in-law. If I hadn’t pushed them together all those years ago, he might never have found a girl as perfect as Lauren. It’s true what they say, mother always knows best.

But weeks later, Lauren is dead and police cars fill the driveway of their idyllic countryside home. As they question Sam, I sense he’s hiding something. Why won’t he look me in the eye? And who does he rush off to meet as soon as the police are gone?

Desperate, I do what every good mother would do: I let myself into Sam and Lauren’s bedroom. What I see, I will never be able to forget. My son’s beautiful new wife was hiding a dangerous secret. Can I clear my son’s name? And could my life be in danger now too?

“A completely gripping, utterly twisted thriller that will leave your jaw on the floor. Perfect for fans of Gone Girl, The Wife Between Us and The Woman in the Window.”