Home
Fiction
The Other Woman by Sandie Jones 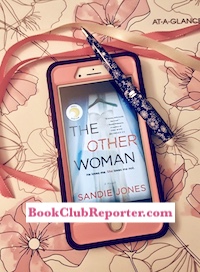 The Other Woman by Sandie Jones is a frightening psychological thriller. Emily falls in love with Adam. But a diabolical woman won’t let him go, his mother.
Author Sandie Jones knocks-it-out-of-the-park with her debut novel, The Other Woman. Have you ever had an interfering mother-in-law? Well, I have. But, that’s probably a story for another time. What I can tell you now is, The Other Woman scared the blazes out of me! I mean it was just all too real.
Emily Havistock meets a handsome man. And he, Adam, is much more than just his good looks. It’s mostly his self-assuredness that draws him to her. Emily feels Adam might just be the right man for her. As they grow closer, Emily desires to meet Adam’s mother. But Adam, doesn’t seem to share Emily’s enthusiasm in that regard. As it turns out, when Emily does meet Adam’s mother, Pammie, things don’t go as Emily had hoped. Emily is caught off guard, by Pammie’s sly, sneaky display of nonacceptance toward her. As Adam’s relationship with Emily progresses, Pammie proceeds to launch a diabolical mission of psychological assaults on Emily with a back-handed compliment here, a cloaked ambiguous statement there, and a series of furtive smirks or twisted-up smiles and winks. Yikes!
And then there is Adam. While most times he seems the perfect boyfriend/fiancé/husband, there are those unexpected times when he seems a bit controlling and judgmental. But that’s probably just part of Adam’s self-assuredness that Emily loves so much, isn’t it?
Now, all this might just seem like a “run-of-the-mill” case of a stereotypical jealous, controlling mother/mother-in-law. But hang on, because you’re in for a story with psychological twists and turns that will keep you guessing, off balance, and wondering what the heck is going on all the way to the end.
Commissions Earned – Ads