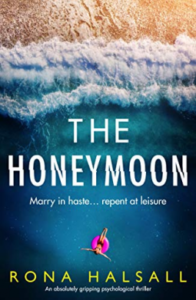 Thriller book review of novel: The Honeymoon. While Chloe is a self-sufficient physical therapist with her own flat in Bristol, her life dreams remain unfulfilled. In the past, Chloe has not had the best luck with men. Then along comes Dan. He is tall, handsome, sensitive and considerate.
After a few months of dating Chloe is thrilled to have Dan in her life. When he asks Chloe to marry him, she decides to throw caution to the wind and go for it. It may sound like Chloe’s happy ever after is off to a great start, but could anything be further from the truth? As soon as they head for the airport to fly away to Chloe’s dream honeymoon in the Maldives, things begin to go wrong…

While dashing through the airport to catch their flight to the Maldives, Chloe soon learns they are not actually headed to the Maldives at all. As they continue moving at breakneck speed toward their flight gate, Dan finally informs Chloe that he has changed their tickets. He tells Chloe that they will be actually flying to an alternate location. He announces their new destination is now the small Spanish Island of Menorca! Dan acts as if this should be considered a wonderful surprise for Chloe. But, Chloe’s not feeling it at all!
While in-flight and headed to Menorca, Chloe, is most definitely, not happy about this turn of events. She even feels angry about it. Nonetheless, Chloe surpasses her anger and tries  her best to go along with all of Dan’s plans for them. But when Dan says they could be happy spending their lives on Menorca, Chloe’s “do what?!” radar finally kicks in. Chloe begins to assert herself and how she feels about what is going on, but Dan remains steadfast in his plans for them.
As Chloe watches her dream honeymoon fade away, she begins to worry…
I enjoyed reading Rona Halsall’s The Honeymoon. I raced through the book, turning the pages faster and faster anxious for Chloe and to see what would happen next. The story would slow down a bit here and there, but that just made me more anxious to see what happens next. And that drove me to keep right on going to the ultimate ending.
The Honeymoon was a satisfying read and I found myself sometimes wanting to yell out “run like hell” to Chloe. But alas, it’s a book and she wouldn’t be able to hear me anyway. But that just goes to show that The Honeymoon made me feel emotion…and that is just what makes a great read!