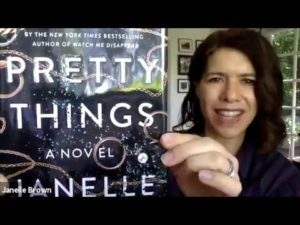 Thriller Novel Pretty Things is an engrossing page-turner! I like to fall asleep to audiobooks. Ha! Not happening with this exciting thriller novel!

Usually, I choose an audiobook version of a novel so I can listen and fall asleep. I set the sleep timer on  fifteen or thirty minutes. How did that work out for me with Pretty Things? Quite frankly, it did not work out at all. On the contrary, Pretty Things kept me awake! And that turned out to be a really good thing because Janelle Brown’s Pretty Things is an awesome thriller novel!

This story takes place in present day time. The character of Vanessa is not only an heiress from a wealthy family, but she is also an online influencer as well. Vanessa is extremely popular. And to prove it, she has a gazillion followers, just as any good influencer should. Vanessa feels like she is on the top of the world. But even grand influencers need a little downtime. What could go wrong by just taking a rest? We will soon find out when a couple of wily grifters turn their attention on Vanessa.

Author, Janelle Brown has penned an intricate story that kept me on the edge! I just had to know what would happen next, and to whom?  After a while, I began to think that maybe not every character is who they seem to be. I kept speculating about which characters are actually who they say they are.

Pretty Things will keep you guessing as there is a good amount of lies, cunning and scheming behavior. This nearly constant state of doubt kept me listening with rapt attention. Just what kind of deceit is going on here? Pretty Things relentlessly kept me on the edge wondering just how this story would end. And to my way of thinking, that is just what a great thriller story should do.

I think Pretty Things is a great book club selection. There is a lot to talk about in this book, such as: crime, the current day timely subject of internet “influencers,” and the story  covers other issues such as family relationships, love, as well as mental health and terminal illness issues as well.