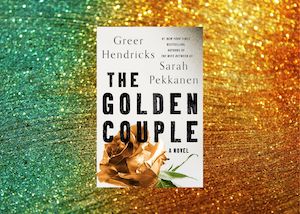 Thriller Suspense Novel – The Golden Couple! Wow! This is the most engrossing thriller novel I have read this year! I loved the unique twists and turns!

I enjoyed the unique story line with plenty of twists and turns to keep readers turning the pages. Personally, my life is so crazy busy! And yet, The Golden Couple demanded my immediate attention. I just could not put this one down! This awesome thriller suspense novel is truly everything great as many critics have professed. Is this story propulsive, twisty and thrilling? Yes! It is all that and more!

The Golden Couple is the story is about a couple with marital issues who decide to see a therapist. The wild ride begins when we learn their therapist has a questionable past and troubles of her own. Hounded frequently, and under pressure, will the therapist finally give up the name of the person her intimidator seeks? One certainly must give the therapist some serious credit as she continues to pursue her livelihood by pivoting in a way most would not even think viable.

And … there is the married couple, Marissa and Mathew Bishop. They have agreed to begin marriage counseling under the extraordinary terms set by the therapist. I can’t say enough great things about The Golden Couple! In and of itself, this story is extraordinary. And that alone could be enough to keep the interest of readers. Yet, the Golden Couple has so much more to offer readers.

The Golden Couple is a thrilling, suspenseful and dangerous delight to read. I don’t know what the author(s) have coming up next, but I would love to be first in line to read it!

The Golden Couple is the next electrifying novel from Greer Hendricks and Sarah Pekkanen, the #1 New York Times bestselling author duo behind You Are Not Alone, An Anonymous Girl, and The Wife Between Us.

If Avery Chambers can’t fix you in 10 sessions, she won’t take you on as a client. Her successes are phenomenal–she helps people overcome everything from domineering parents to assault–and almost absorb the emptiness she sometimes feels since her husband’s death.

Marissa and Mathew Bishop seem like the golden couple–until Marissa cheats. She wants to repair things, both because she loves her husband and for the sake of their 8-year-old son. After a friend forwards an article about Avery, Marissa takes a chance on this maverick therapist, who lost her license due to controversial methods.

When the Bishops glide through Avery’s door and Marissa reveals her infidelity, all three are set on a collision course. Because the biggest secrets in the room are still hidden, and it’s no longer simply a marriage that’s in danger.

Greer Hendricks – worked as an editor for twenty plus years. Hendricks spent over two decades as an editor. Over the years her books have been published in The New York Times and Publishers Weekly.

Sarah Pekkanen  – is known as an internationally and USA Today bestselling author of seven  novels. Pekkanen was a former investigative journalist and a feature writer as well. Her work has been published in The Washington Post, USA Today, and others.

Hendricks and Pekkanen – have collaborated in writing the New York Times bestselling novels The Wife Between Us, An Anonymous Girl, and You Are Not Alone.