When You See Me – Detective Thriller – Lisa Gardner 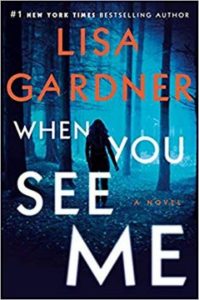 When You See Me - Detective Thriller - Lisa Gardner

When You See Me – Detective Thriller – Lisa Gardner

When You See Me – Detective Thriller is my first read by Lisa Gardner. And while When You See me is just one book in the D.D. Warren series, it stands especially well on its own. While reading this engrossing detective thriller novel, I lamented that it was at such a busy time of the year, I wasn’t able to devour the book as quickly as I had hoped. But, finish it, I did! And I thoroughly enjoyed When You See Me.
Bravo to Lisa Gardner who expertly provided believable and well-drawn characters. When You See Me involves a task force of police detectives and forensic experts. The task force includes a past victim to assist with any pertinent details she might be able to provide as the investigation progresses. The specialized investigative groups work well with each other and with the overall team. I must say, I learned quite a lot about this particular type of detective work.


The specialized teams continue to unearth more and more human skeletal remains in a remote area outside a small tight-knit town.  More and more bones of young female victims are discovered. In some spots, the bodies of the victims were buried in mass graves, which, over time, meant the bones became co-mingled.

I learned about how  forensic anthropologists use their specialized skills in the analysis of victims of homicides, accidental deaths, natural deaths, and mass fatalities. The more I learned, the more I began to wonder if the past victim (on the team), might be the only victim who ever managed to survive the sadistic, yet elusive predator(s). This fact, in and of itself, was enough for When You See Me to rank high on my, “this story gives me the creeps” barometer. But when you factor in the strange, secretive and weirdly peculiar townspeople…you know you have an intricate murder mystery that is much bigger than it initially seems.
When You See Me is a chilling and edgy thriller novel, and a powerful page-turner. The underlying tension, in this ominous story, simmers like a hot pot of water on the stove, that seems … just … about … to  burst into a rolling boil! Overall, I found When You See Me to be a powerful crime-detective-procedural thriller novel.
Commissions Earned – Ads