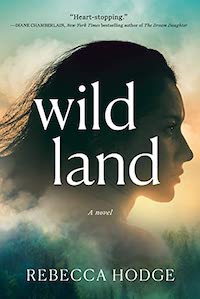 Wildland Contemporary Thriller novel kept me riveted to a women’s fiction story when it takes a complete about face into propulsive action thriller.

Kat Jamison has cancer. She decides to stay at the mountain forest cabin where she and her, now deceased, husband used to spend their vacations together over the years.

All alone in her cabin, Kat wrangles with how she will decide to spend what is left of her life. Will she decide to continue chemo? Or will she give up and let go? While Kat has determined to spend this time alone, fate has something very different in mind.

Then Kat’s daughter shows up at the cabin with a big rescue dog for her mom. Kat wants nothing to do with a dog! She has never been a “dog-person” in the past and doesn’t intend to change now. While Kat insists her daughter take the dog with her when she leaves, that doesn’t happen. Now Kat is the not so proud owner of a rescue dog.

Soon after her daughter leaves to return to work responsibilities, Kat is visited by several temporary neighbors vacationing in the area. Scott, a father with a young teen daughter,  Lily, and Malcom, a father with a nine-year-old adopted son, Nirov. So much for Kat’s desire for peace and quiet. And to make things worse, Kat while on a walk with the children, finds a small and badly injured dog. She takes the dog to a local vet who manages to save the dog’s life.

Both the children stayed over-night with Kat in her cabin. Now Kat has two dogs and two children with her in her cabin and the men are on a fishing trip.

The next morning shortly after she awakes, Kat, smells smoke. Now remember…I mentioned, fate steps in and everything changes… Here we go! The forest is on fire! Now this women’s fiction story flips into a propulsive action novel. Kat has children and dogs to rescue from the fast moving forest fire!

From this point on, we are reading a riveting action story where every decision and every moment counts. Pulsating danger is everywhere. Kat loses no time as she sets out to find a way to safety with the terrorized children, and the two dogs in tow. Yes! She took the dogs! Yay! But will the canines survive? Will any of them make it out alive?

As the fire continues to rage and to advance across the mountainous area, there is no time for anything other than to keep on moving…and to keep on forging ahead. Tired, bloody, injured, coughing, and blinded by the thick smoke, somehow Kat keeps moving. How long will it be before Kat, the children and the dogs become engulfed by the ever encroaching smoke and flames? And even if anyone is even able to be out there searching for them, will they be found in time?

And if you think I shared too much of this story, believe me there is ever so much more to Wildland! I left out some really awesome stuff, but you’ll just have to read Wildland to truly experience this story. This story may even leave readers breathless. The powerful suspense was getting to me.I actually had to tell myself to take some much needed deep breaths of air while reading Wildland.

The fact that this is Rebecca Hodge’s debut novel, just blows me away! I cannot conceive of a reader who would not love this story. I think Wildland would make an awesome movie. Someone needs to write the screenplay. Wildland hits pay dirt on every level! This Wildland contemporary thriller is an astonishing story of survival, responsibility, and astounding fortitude of mind, body and spirit!

She’ll do anything to save them. But what will she do to save herself?

When Kat Jamison retreats to the Blue Ridge Mountains, she’s counting on peace and solitude to help her make a difficult decision. Her breast cancer has returned, but after the death of her husband, her will to fight is dampened. Now she has a choice to make: face yet another round of chemotherapy or surrender gracefully.

Self-reflection quickly proves impossible as her getaway is complicated by a pair of abandoned dogs and two friendly children staying nearby, Lily and Nirav. In no time at all, Kat’s quiet seclusion is invaded by the happy confusion of children and pets.

But when lightning ignites a deadly wildfire, Kat’s cabin is cut off from the rest of the camp, separating Lily and Nirav from their parents. Left with no choice, Kat, the children, and the dogs must flee on foot through the drought-stricken forest, away from the ravenous flames. As a frantic rescue mission is launched below the fire line, Kat drives the party deeper into the mountains, determined to save four innocent lives. But when the moment comes to save her own, Kat will have to decide just how hard she’s willing to fight to survive–and what’s worth living for.

A heart-pounding novel of bravery, sacrifice, and self-discovery, Wildland will keep you on the edge of your seat to the very last page.

Rebecca Hodge is an author of fiction, a veterinarian, and a clinical research scientist who lives and writes in North Carolina. Fiction writing is the space where her creative side comes out to play, and her writing centers on characters who discover that life is not a spectator sport. She has three grown sons, two crazy dogs, and one patient husband. When not busy writing, she loves hiking, travel, and (of course) curling up with a good book.