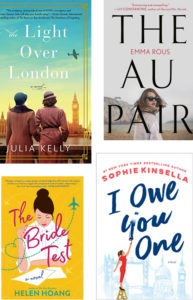 How can we best support women authors? That’s easy, if you’re the leader of a book club, make plans for your book club to read books by women authors. Book Club Reporter’s Book Buzz News brings you a 2019 Reading list of women authors books.

Here’s a 2019 women authors – women’s fiction book list for your book club to read and discuss:

Reminiscent of Martha Hall Kelly’s Lilac Girls and Kristin Hannah’s The Nightingale, this sweeping, entrancing story is a must-read for fans of remarkable women rising to challenges they could never have predicted.

4. I Owe You One – Sophie Kinsella

The next novel of psychological suspense and obsession from the authors of the blockbuster bestseller The Wife Between Us.

Seeking women ages 18–32 to participate in a study on ethics and morality. Generous compensation. Anonymity guaranteed.

Question #1: Could you tell a lie without feeling guilt?

Question #2: Have you ever deeply hurt someone you care about?

As Jess’s paranoia grows, it becomes clear that she can no longer trust what in her life is real, and what is one of Dr. Shields’ manipulative experiments. Caught in a web of deceit and jealousy, Jess quickly learns that some obsessions can be deadly.

Question #3: Should a punishment always fit the crime?

From the authors of the blockbuster bestseller The Wife Between Us comes an electrifying new novel about doubt, passion, and just how much you can trust someone.