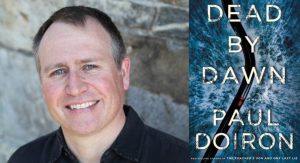 Dead by Dawn-Action Thriller is a dizzying thrill-ride through the hilly Maine countryside. Mike Bowditch is a game warden in Maine and he takes his job seriously.

This is the second book I have read that takes place in a rural area of Maine and I was surprised at the crime encountered in both of the books I read.  However, I will say that Dead by Dawn was literally  the more chilling of the two books I read.

It wasn’t until I had already read several chapters of Dead by Dawn before I realized that this is just one of the many books in a series written about the fictional character, Warden Mike Bowditch author, by author Paul Doiron. Regardless of the previous books in this series, I was not discouraged from beginning with Dead by Dawn.

Mike has been called in to investigate a suspicious drowning of a moneyed professor. The professor’s daughter-in-law refuses to accept the drowning was an accident. And in fact, she has her own theory of how the professor died and who caused his death.

It doesn’t take long for me to realize how dedicated the Warden is to his job. Mike sets out in his jeep to make a call on a local family of ill repute who assert they have knowledge in regards to the Professor and of what really went down. Now it is obvious that Warden Mike is a seasoned professional.  And he knows his way around crime solving. However, I became immediately dismayed when the Warden sets out on his own, except for a caged wolf in a cage in the jeep.

The Warden fights for control of his jeep as it loses traction and careens out of control. Mike finds himself in trapped inside his jeep that is now rushing and rolling in the freezing and churning river waters. Now, I just kept telling myself the main character can’t die this early on in the story. And what about that wolf still caged in the back of the jeep!

Okay, I’m not going to give away anything else that happens in Dead By Dawn. What I will tell you is that I am now a big fan of author Paul Doiron and the book series.

My last word on Dead By Dawn is awesome!

Mike Bowditch is fighting for his life. After being ambushed on a dark winter road, his Jeep crashes into a frozen river. Trapped beneath the ice in the middle of nowhere, having lost his gun and any way to signal for help, Mike fights his way to the surface. But surviving the crash is only the first challenge. Whoever set the trap that ran him off the road is still out there, and they’re coming for him.

Hours earlier, Mike was called to investigate the suspicious drowning of a wealthy professor. Despite the death being ruled an accident, his elegant, eccentric daughter-in-law insists the man was murdered. She suspects his companion that day, a reclusive survivalist and conspiracy theorist who accompanied the professor on his fateful duck-hunting trip—but what exactly was the nature of their relationship? And was her own sharp-tongued daughter, who inherited the dead man’s fortune, as close to her grandfather as she claims? The accusations lead Mike to a sinister local family who claim to have information on the crime. But when his Jeep flies into the river and unknown armed assailants on snowmobiles chase him through the wilderness, the investigation turns into a fight for survival.

As Mike faces a nightlong battle to stay alive, he must dissect the hours leading up to the ambush and solve two riddles: which one of these people desperately want him dead, and what has he done to incur their wrath?