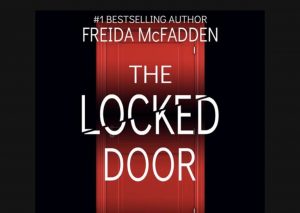 The Locked Door Thriller is the best thriller I’ve read since The Silent Patient! What do they have in common? You won’t guess the ending!

Seriously, The Locked Door Thriller novel is really the best thriller I have read since The Silent Patient! One of the best things these two books have in common is that it was impossible for me to guess the ending.

The Locked Door Thriller novel is the story of a young girl, Nora, whose father is a serial killer. Nora manages to rise above her situation by becoming a respected doctor and surgeon. But the terrible evil deeds of her father continue to haunt Nora throughout her life.

I loved how we get to know Nora as a child and see how she deals with her childhood and how she if affected (whether she realizes it or not) by what goes on in the basement of her family’s home.

I listened to the audio version of The Locked Door thriller novel. Now I must say here that I have read reviews of the audio version that just slammed the narrator of this book. I find that unfortunate, and I completely disagree with the negativity aimed at the book’s narration. For one thing, there is only one narrator. And the narrator has the task of voicing children’s voices and the voices of both the female and male characters.

I especially enjoyed the narration. I mostly appreciated the narration of the voice of Nora as a young girl. However, I thought all the voices were narrated well and I never felt like I didn’t know which character was speaking. I also felt the narration of Nora throughout the book, was an accurate reflection of her troubled mind due to her upbringing. I saw Nora as an intelligent woman, a gifted surgeon, yet still a distrustful young girl in her personal life.

For sure, the serial killer aspect of the Locked Door story has a definite “creep” factor. Nora’s father is a serial killer who cuts off the hands of his women victims and saves the finger bones. Yikes! As the reader, I made the journey with Nora through her childhood and to her present day life as a gifted surgeon. In The Locked Door thriller, author, Frieda McFadden brings the character of Nora to life with amazing depth.

There were times when my heart went out to young Nora as she tried to navigate her impressionable youth with such strange and evil goings on around her. And even though Nora was able to rise above her childhood experiences, it is clear that as an adult she still struggles as she navigates her life. Even while acting as a professional doctor of surgery, Nora has a softer side. And that side of her is demonstrated by her concern for others. Nora worries that one of her patients might be battering his wife. And she worries that a fellow surgeon might be getting too cozy with their female employee. Nora tries to warn him about his inappropriate behavior towards the young woman. And I appreciated that timely nod to such real life issues.

Readers also see that one of Nora’s struggles is in her personal social life, or lack thereof. As a busy surgeon, Nora doesn’t have all that much time for a social life. However, It is clear that Nora’s childhood has stunted her ability to enjoy a full and rewarding social life. She struggles with relationships and isn’t able to share her feelings. I mean really how do you share your feelings when your father is a serial killer?

Tragically, Nora becomes a suspect of recent copy-cat serial murders. A dangerous criminal is killing young women in the same manner as Nora’s father had years before. However, the targets of this current serial killer is are Nora’s women patients. Despite her professional success, it is clear Nora is a distrustful and lonely woman with no one to turn to. Her attempt to resurrect a social life with an old boyfriend didn’t seem to go very well. Nora’s ability to trust is nearly non-existent. Yet that does seem to be an expected result of her troubled childhood.

Author, Freida McFadden doesn’t make solving this suspenseful thriller easy. I knew about three-quarters of the way through, that this author was going to bring me a surprise ending. And I that made me love this story even more.

I tremendously enjoyed reading The Locked Door. And I will most definitely be reading more books by Freida McFadden.

Some doors are locked for a reason…

While eleven-year-old Nora Davis was up in her bedroom doing homework, she had no idea her father was killing women in the basement.

Until the day the police arrived at their front door.

Decades later, Nora’s father is spending his life behind bars, and Nora is a successful surgeon with a quiet, solitary existence. Nobody knows her father was a notorious serial killer. And she intends to keep it that way.

Then Nora discovers one of her young female patients has been murdered. In the same unique and horrific manner that her father used to kill his victims.

Somebody knows who Nora is. Somebody wants her to take the fall for this unthinkable crime. But she’s not a killer like her father. The police can’t pin anything on her. As long as they don’t look in her basement.

About The Author – Freida McFadden:​

Number 1 Amazon bestselling author Freida McFadden is a practicing physician specializing in brain injury who has penned multiple Kindle bestselling psychological thrillers and medical humor novels. She lives with her family and black cat in a centuries-old three-story home overlooking the ocean, with staircases that creak and moan with each step, and nobody could hear you if you scream. Unless you scream really loudly, maybe.

If you enjoy awesome thriller novels click here to read my book review of: The Golden Couple!